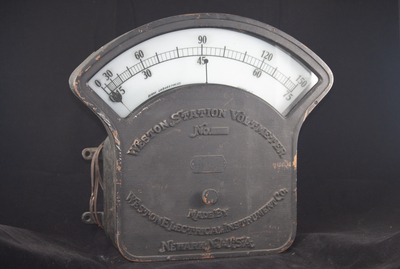 One of the many electrical engineering machines from Weston Electrical Instrument Co. The company was founded by Edward Weston, in 1888, in Newark. Weston was an early competitor of Thomas Edison in electric light but then turned toward innovations in electrical measurement instruments, gaining prominence in scientific and engineering fields. He was also one of the founders of the Newark Technical School, which became NJIT. Weston Hall is named after him and his son, Edward Faraday Weston. In 2016, Weston’s meters were awarded an IEEE Milestone, the plaque for which is viewable inside the NJIT Electrical and Computer Engineering Department. This voltmeter is used for measuring volts, the differences of potential between points of an electrical circuit.