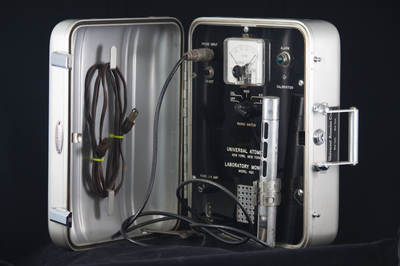 A Geiger counter is used to measure ionizing radiation, such as alpha or beta particles or gamma rays, most often associated with nuclear decay and "radioactivity". This unit was made by the Universal Atomics Corporation of New York, NY. An equipment inventory tag suggests that this unit was originally owned by Halliburton. This suitcase-type model was produced around 1957. At that time, there was growing interest in nuclear power and nuclear research, as well as concerns about nuclear weapon attacks as the Cold War intensified. The Geiger counter became one of the most widely recognized scientific instruments by the general public.