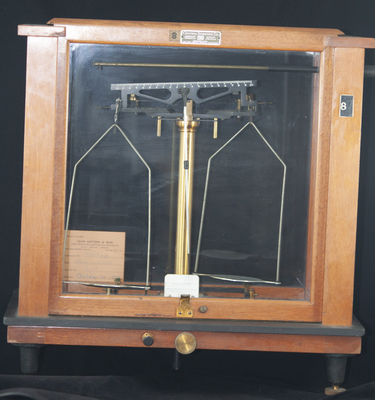 Seederer-Kohlbusch (SeKo) was a scientific balance company established, originally, in 1859 by German immigrant C. Herman Kohlbusch as the Herman Kohlbusch Balance Company. Around 1925, the company was bought out by Jacob E. Seederer, another local balance maker. SeKo was based in North Jersey and New York City. It specialized in analytical balances, such as this one, that were relatively portable and encased in wood. Balances are used to determine masses of samples. Your sample would be placed on one pan while calibrated masses would go on the other. This particular balance was last calibrated by John Gattoni and Son in 1954. At this time, balances designed for student use cost around $60, whereas higher-end models for scientific research could cost between $200 and $400.