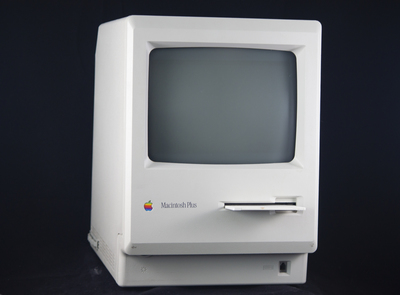 Apple Computer began to sell the Macintosh in 1984 and changed the way people use personal computers. It introduced a number of features to the wider public that became standard for personal computers, such as: the graphical user interface, bitmapping, WYSIWYG documents, the mouse, and 3.5” floppy disks. The Mac found success with its dominance over the desktop publishing industry, alongside aldus PageMaker software. The Macintosh Plus was the 3rd Macintosh model, released in 1986; it doubled the amount of RAM from the previous version (from 512KB to 1MB!) and was the first Mac with a SCSI port. This Macintosh was used by Dr. Marek Rusinkiewicz, the former Dean of NJIT’s Ying Wu College of Computing.

No mouse or keyboard