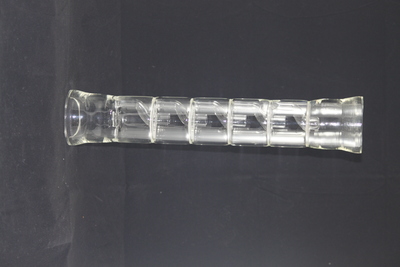 This is a section from a bench-scale distillation column, fabricated by a precision scientific glassblower. Distillation is one of the most important unit operations for chemical engineers. Such columns separate components in a liquid mixture by boiling point. Vapor rises up through the perforated plates, on which it mixes with liquid traveling down through the curved internal tubes. The vapor strips the liquid of more volatile (i.e. lower boiling point) components, while the liquid becomes enriched in less volatile (i.e. higher boiling point) substances. Commercial stainless steel columns in petroleum refineries, such as the Phillips complex in Linden NJ (exit 13 New Jersey Turnpike), are over 100 feet high!